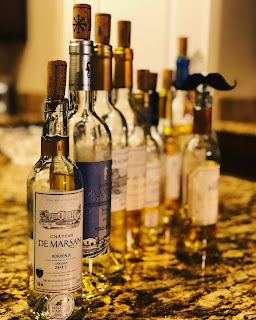 It’s a good day to be a Wine Writer when box of liquid art arrives for an upcoming wine tasting. This time it was 11 bottles of French wine from @snoothmedia for a virtual tasting with Jean K Reilly, Master of Wine. No, I didn't break into the stash early but I did seriously consider it.

Timeless Elegance: Historical, yet still fashionable, "Golden Bordeaux" wine is named for its color, as well as its "golden" stature. Once upon a time, it was reserved exclusively for royalty. Today, we commoners can go for the gold as it's an affordable luxury available to all. There are ten distinct regions that produce Golden Bordeaux - Barsac, Bordeaux Supérieur, Cadillac, Cérons, Saint-Macaire, Graves Supérieures, Loupiac, Premieres Côtes de Bordeaux, Sainte-Croix-du-Mont, and finally, Sauternes.

Each region has their own unique characters and interpretations. The area is an ideal climate for Noble Rot, which is a fungus that can be beneficial to sweet wines. The misty mornings and warmer afternoons form the fungus which when in contact with the fruit results in a more concentrated grape with a pronounced sweetness.

Let's first discuss what Golden Bordeaux is not. It's true, when someone mentions Bordeaux, we immediately thinks Red. That's fair as 90% of the wine from the Bordeaux region of France is in fact, Red. Additionally some think a white Bordeaux is nothing but sweet. That's somewhat correct but wine is much more complex than that. There is undeniable sweetness to these wines but many interpretations, varying characteristics including levels of sweetness. Sémillion is the dominate grape varietal with various levels of Sauvignon Blanc and Muscadelle. Sèmillon is known to age well. Like 100+ years well. As these wines age the impression of sweetness can change. Some are even known to become savory or earthy. In other words, we need to stop thinking as Golden Bordeaux as simply a dessert wine. As we discovered during the virtual tasting these wines become even more interesting with well chosen foods but hold their own when the pairing is another glass.

A Golden Bordeaux demonstrates great balance, making it versatile food wine. For pairing, we’re advised to think savory, rather than sweet. First response is a charcuterie board is calling but classic pairings including foie gras, Roquefort and Stilton cheeses. A little online research suggested desserts such as crème brulee, salted caramel pudding, and macarons. To company the wine we were sent a Trader Joe's care package of dried fruits including mandarin, pineapple, orange peel, mango and spicy ginger, as wells some dried lemon grass. These flavors were intended to and succeeded in drawing out the aromatics of the wines. We also had some Trader Joe's blue cheese crackers which was a good example of the brilliance of sweeter wine with savory bites. We added a harvest salad but spicy sushi or Thai food could be interesting to try.

Research concluded, pairing set....the only thing left to do was invite some friends over to indulge in an evening for discovering these treasured French wines. The invitation for wine tasting is alway well received. 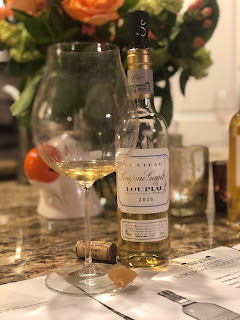 These wines were complex and over-the-top aromatic. They are meant to be slowly sipped and discovered. In other words, Golden Bordeaux is a complex varietal that one needs to spend some significant time with.

The first impression wine was from Château Dauphine Rondillon Loupiac 2009 Cuvee d'Or. The ideally amber colored wine came from an established vineyard planted in 1910 and benefitted from the for mentioned Noble Rot before spending a year in oak barrels. This was an elegant wine with honey citrus flavors. We found pairing this with the dried pineapple was delightful.

Segur du Cros 2017 loupiac which we paired with our harvest salad. The wine was produced from 60-year vines nestled on a hillside by the Garonne River. Still we tasted honey but found it intensely floral. 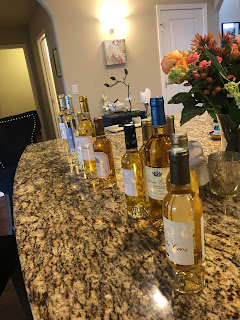 Thank you Snooth and Jean Reilly, Master of Wine for virtually taking us through the line up of Golden Bordeaux. Reilly had a great suggestion on making cocktails with them. Yes, we went there. Très Bien! 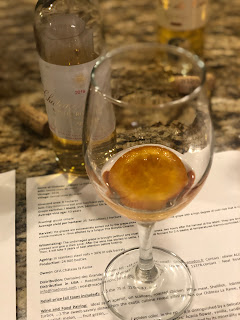