Charmed to make your acquaintance... 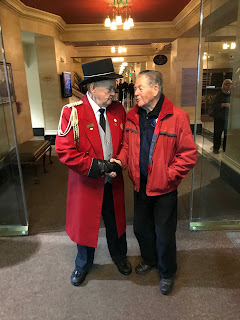 RIP dear John Reed
What a lovely, warm, hardworking and humble man. It was a pleasure to make your acquaintance and always a honor to see you at the historic Davenport Hotel. Mr. Reid passed quietly in his sleep last night at 88 years young

💛
The following is a post I made last thanksgiving as Mr Reed and my father hit it off like school boys.
“Introducing two men who refuse to retire; longtime Davenport Hotel door man John Reed and my father, Dr. William D Ross.
Reed has been at the Davenport Hotel for over 75 years, Though he took time off for college, Reed was hired at the tender age of 13 for 13 cents an hour as a busboy by Louis Davenport on June 1, 1942. Reed is the hotel’s longest serving employee by a landslide. In his honor, the hotel recently renamed its board room after him and gave him a new refrigerator stocked with all the fixins for gin and tonics, one of Reed’s favorite drinks. He works four days a week, showing no signs of cutting back hours. 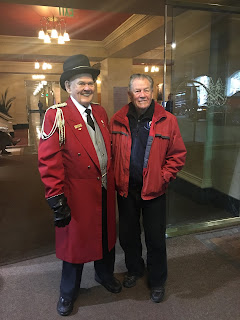 My accomplished father will be 89 next month and still owns/runs an international business, is a consistently published scientific author, guest lecturer and writes something meaningful every day. He’s a former university professor, who put himself through school and has been on the Olympic Congress amongst other notable international organizations. As a scientific leader in sport, human growth and development, he has been an innovator and unapologetically bold about calling out fraud in his field of expertise.
My Dad has fond memories of visiting the “fancy” hotel as a youngster on family trips from Trail, BC.
It’s an understatement to say these guys hit it off. Dad said he was sorry to miss John’s 75th party but will be sure to attend his 100th. The fast friends chuckled as they happily posed for a photo”
Photo Credit: James Allen
“Choose a work that you love and you won’t have to work another day” 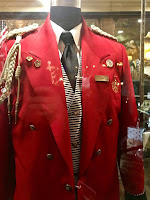 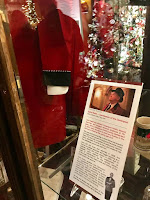 "In honor of the passing of John Reed, our beloved doorman and longest tenured employee of more than 75 years, we have proudly displayed his coat. John will be remembered as an icon for our hotel, our industry, and the entire Spokane community."
(Display photos and quote courtesy of the historic Davenport Hotel)