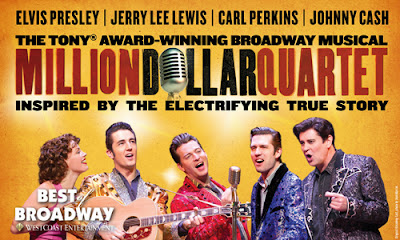 I attended opening show night last night. This is a not too miss show. The iconic music was spot on. I'm still in awe of the talent. You NEED to go! 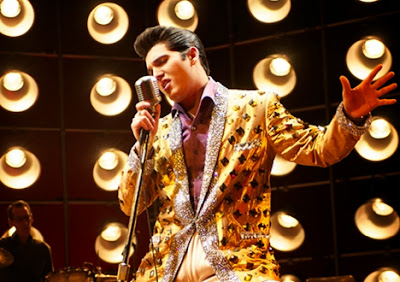 The musical is based on an actual event that occurred on December 4, 1956, when these four young musicians were gathered by Sam Phillips, the “Father of Rock ’n’ Roll,” at Sun Records in Memphis for what would be one of the greatest jam sessions of all time.

This music lends itself to something a bit stronger than wine.
So here's your liquid libation pairing for the Broadway musical  that's as diverse as the iconic artists themselves.

Elvis Presley
Elvis Presley was an American singer, musician, and actor. One of the most significant cultural icons of the 20th century, he is often referred to as "the King of Rock and Roll", or simply, "the King". Elvis' eye color was blue. He would wear brown-tinted contact lenses for some films. From “Blue Suede Shoes" that was written by Carl Perkins and "Blue Christmas" to "Ole Blue Kentucky" and "Blue Hawaii" the King had a fondness for the color. Hence the All Shook Up cocktail with Blue Curacao.

All Shook Up
Shake first 3 ingredients with ice and strain into a martini glass.
Splash club soda and garnish with an orange wedge.

Jerry Lee Lewis
Jerry Lee Lewis is an American rock and roll and country music singer-songwriter and pianist. He is known by the nickname "The Killer" and is often viewed as "rock & roll's first great wild man".
Goodness Gracious...Fireball Whiskey. When I first tried this someone said it taste just like Big Red chewing gum. And that's exactly the flavor that comes to mind when drinking this. it does warm you up on these cold winter nights.

Johnny Cash
American singer-songwriter, actor, and author who was considered one of the most influential musicians of the 20th century. Although he is primarily remembered as a country icon, his songs and sound spanned other genres including rock and roll and rockabilly—especially early in his career—and blues, folk, and gospel. No fancy cocktail for The Man in Black. WHISKEY! Simple, complex and iconic.

Rockabilly Juice
Method:
Build over ice in a tall glass, squeeze and drop in a lemon wedge
* Try infusing your own tea flavors,

Wondering were to get a classic cocktail before the show?
Here's SIP's list of some notable area bartenders who can really shake it. 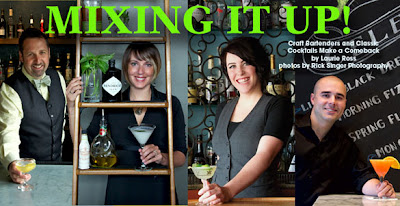 “Learn to savor the spirits of rum, gin, brandy, whiskey and the entire spectrum of deeply flavored drink constituents. As with the finest cuisines, a sophisticated palate will greatly benefit you. It’s what they call ‘acquired taste’ and it’s what separates adults from children”

Classic Cocktails have made a swanky comeback. These time-tested drinks are still around for a good reason. They deserve to be sipped and savored, not slammed and forgotten. Today’s best mixologists pay their respect by mastering the classics before carefully adding any contemporary nuances. This represents a return to sophistication, where patrons slow down and embrace the idea that everything old is new again. Here are four liquid artists who precisely craft cocktails as opposed to slinging drinks.

Patrick Kasper not only shows attention to detail with the cocktails he creates, but also gives that very same concern to the customers for whom he pours. Kasper has that rare ability to run a busy bar and still make patrons people feel like regulars on their first visit. You may have arrived at Luna but while you’re in the bar, you’re at Patrick’s Place. Though he’s good at working the room, he takes making your drink seriously. Friends send friends to experience his creative cocktails. Kasper puts in extensive research and pushes the limits by boldly trying new things. An example of this is “The Warmth,” which is created by lighting the drink on fire and toasting spices in the blaze for the drink. One of the most popular pours is Kasper’s namesake sparkling cocktail, “Patrick’s Passion.” Although he enjoys helping patrons discover their new favorite drink, Kasper is currently suggesting the “Spring Fling,” which is made of Lavender gin, St. Germain, falernum, grapefruit and sour.
Patron Pick: Patrick’s Passion
Bartender Sip Tip: Spring Fling

Heatherann Franz is an extreme multi-tasker. To a bartender this skill is paramount when it comes to consistently turning out great drinks when the bar is busy. But whether things are hopping or not, one thing is apparent: Franz loves being behind the bar. She enjoys taking a classic cocktail, adding modern components and creating a new classic. Franz will happily serve patrons their “usual” but would rather take them out of that comfort zone by educating them about spirits. This often leads to an expanded list of “usual” drinks for her customers/friends. Franz believes that cocktails are meant to be treasured and, therefore, the flavors need to be distinctly delicious. Though customers often go for the classic Wild Sage Martini, Franz suggests you try her popular namesake, the “HF Bean’s Old Fashioned.” This cocktail is comprised of Bulleit rye whiskey, muddled orange, peach bitters and brown sugar. Franz describes it as somewhat different by being sweet enough for sippers but still being alcohol forward enough for mature palettes.
Patron Pick: Wild Sage Martini
Bartender Sip Tip: HF Bean’s Old Fashioned

Paul Harrington was a well-known San Francisco barkeeper and notable drink author who grew up to become an accomplished architect. Spokanites rejoice that Harrington recently gave in again to the lure of restaurant industry. While still an architect, Harrington can be found serving well-executed cocktails as a proprietor of the recently opened Clover. Known for years in the Bay Area as the “Alchemist,” he wrote a weekly online drink column for Hot Wired and penned a book entitled Cocktail: The Drinks Bible for the 21st Century. Thanks to Paul’s decades of experience, Clover already has a reputation for its inviting bar and well-crafted drinks. Not surprisingly, the drink menu is based on the classics and the barkeepers focus on execution and consistency. A drink frontrunner is the popular “Jasmine,” composed of gin, Cointreau, and lemon juice. When I asked Harrington what he recommended, he struggled. He has dreamed for years about the kind of bar he would design and every cocktail on the menu is distinctive and earned its place for a reason. Harrington did finally suggest the “North Utsine” made gin, lime juice, ginger syrup and bitters as a drink to try. Note, too, that a number of the cocktails on the menu are Harrington originals.
Patron Pick: Jasmine
Bartender Sip Tip: North Utsire

Bon Bon focuses on classic cocktails with occasional clever contemporary twists. Head bar-keep Crystal Bertholic is well-studied in cocktails and it shows. Fellow bartender Kelli Green describes Bertholic as both “magical and a big nerd” when it comes to concocting cocktails. At Bon Bon, bartenders often conversationally start with a series of questions prior to suggesting a cocktail. This fact-finding mission pays off as regulars have developed a level of trust along with a true love of spirits. This intimate bar encourages customers to interact as they are not only close in proximity but because of the welcoming atmosphere set by those who tend the bar. The “Old Fashioned” is a popular drink, but Green suggests you try the showstopper “Old Flame.” This gin drink consists of egg white, simple syrup, lemon and Green Chartreuse that is lit on fire.
Patron Pick: Old Fashioned
Bartender Sip Tip: Old Flame 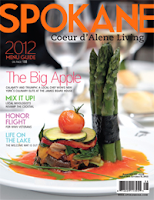