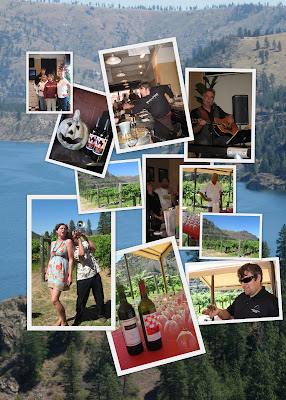 A legacy of good grapes: Off the shores of the majestic Lake Roosevelt, it was discovered that over a century ago the original use of the land was for grape growing. Washington State University viticulturists declared the area to be an ideal place to grow French Bordeaux grape varietals, including Merlot and Cabernet Sauvignon. Whitestone Vineyard was founded by Walter and Judy Haig in 1992.  With the help of Washington State University, the vineyard site was prepped and made ready for planting.  In the spring of 1994, the vineyard was planted, officially re-introducing grape vines to the area. 1996 witnessed the first harvest at the vineyard, with the grapes purchased by some of the fine wineries with obvious good taste.

After a decade of experience growing wine grapes in the shadow of Whitestone Rock, Walter and Judy decided to start making wine themselves in 2001 by keeping a small amount of their Merlot grapes. The following year the winery produced wine from all three of their grape varietals. Using the grapes only from their estate vineyard, Whitestone is able to handcraft bold red wines and resurrect the tradition of wine making in the region. The Fall of 2005 brought with it two big events.  The first was the grand opening of a winery and tasting room in Wilbur, WA, which marked the debut of their 2001 Merlot.  The second big event was really a non-event; for the first time, Whitestone grapes were not sold to other winemakers.  100% of that year’s crop went entirely into Whitestone wine, as it has ever since.

The vineyard and the winery are a true family run business, with Michael Haig, Walter and Judy's son, running the vineyard and making the wine. Mentored by Robert Wample, the sixteen-year old Michael grew up among the vines, helping set up and plant the Lake Roosevelt Shores Vineyard.  As the vines grew and matured, so did Michael’s love and appreciation for wine. The family believes great wine comes from great fruit and it is the winemaker’s job to showcase the gifts of Mother Nature and basically not screw it up.  Family members assist in the running of the tasting room, bottling, events, and blending parties. Whitestone has a casual approach to wine is reflected in their tasting room and at their events. Expect to have a good time with  red wine and live music.

Sip Tips: Known for their “Pieces” line of blissful blends, Haig has created a themed wine series that is extremely marketable. “Love you to Pieces” for Valentine’s Day, “Scared to Pieces” for Halloween and “Pieces on Earth” as the annual winter holiday wine. The blends vary a little bit with Haig tweaking the Pieces of Red wine winning formula for each release. In addition be sure to experience the 2007 St. Vincent and the 2007 Cab Franc.

Sip Picks: Best wine club event; Cajun in the Cab, a summer New Orleans-style boil at the vineyard, perch above Lake Roosevelt with live music and lots of red wine.