EMVY & GRC BridgePress: Making wine with a little help from their friends. 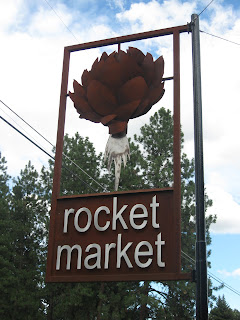 I adore the Saturday drop-in wine tasting at the Rocket Market. Each Saturday afternoon from 4 - 7 pm, you can meander in and sample wine and sometimes beer in the atrium from the people who craft and sell them in this market. It's a casual and intimate approach to wine, where you can sip and chat wine with the passionate people behind the label. The Rocket market is located at  726 E 43rd (Just off the top of Grand on the South Hill). Frequent Sip's Weekend 'O Wine report for all the RM's winescapades.


Yesterday had the delicious pleasure of trying not one but two local labels, which have partnered with Grande Ronde's Dave Westfall and John Mueller, who provided a special opportunity for these budding winemakers while adding extra variety to the list of wines available through the combined operations. Under this cooperative arrangement the new winemakers created top-quality products without the risk of spending a lot of money for equipment and contracts. Making wine with a little help from their Friends. EMVY operates under their own license as will GRC BridgePress in the near future. The Wine Cellar (Grande Rhone's downtown tasting room) features EMVY and GRC BridgePress wines.

It was a pleasure to meet Mark and Valerie of
EMVY Cellars, who produces approximately 100 cases of a single Bordeaux style red wine appropriately entitled DEVOTION. What a treat to taste a vertical of the 2002, 2003 and 2005 vintages. Each had its own unique character expressing the brilliant fruit of the prestigious Seven Hills vineyard in Walla Walla.


SIP TIP: It is recommend that DEVOTION is allowed some breathing room - aerate prior to drinking.

2002 DEVOTION (56% Cabernet Sauvignon, 44% Merlot)  - This debut vintage is impressive to say the least. Well-balanced with intense fruit such as black currant and dark cherry with a trace of earthiness.


2003 DEVOTION (53% Cabernet Sauvignon 47% Merlot) - This is a more robust wine in comparison to it's supple predecessor. Deep and flavorful with structure, you can expect the black currant and earthiness but with bright cherry and hints of chocolate and a trace of smoke. This is the one that captured the attention of my palate, being my favorite of this vertical tasting.

2005 DEVOTION (58% Cabernet Sauvignon 42% Merlot) -  Layers of structure and balance. Deep, dark cherry fruit, earthy undertones with a hint of cedar and a zing of spice. Bravo! Wait, maybe this one is my favorite.


You can try DEVOTION AT the Grand Rhone "Wine Cellar" located at the corner of 2nd & Lincoln in downtown Spokane. EMVY is the newest member of the Spokane Winery Association and is participating in Holiday Wine Festival which takes place Novemeber 19-21 at area wineries.
Russian artist Alexei Kasantzev is the featured artist on the Devotion labels, which are stunning and special.


GRC BridgePress Cellars, a venture by Brian and Melody Padrta whose debut into winemaking was with a 2005 Cabernet Sauvignon from Seven Hills Vineyard in Walla Walla. It was bottled under the Grande Ronde license, although the Padrtas now have their own license and the proud distinction of being Washington State's 600th winery.

The name BridgePress refers to the roots of the friendship between the Padrtas and Westfall, who met years ago through bridge tournaments often played at the Ridpath Hotel. The wine label uses images from playing cards. Winemaking is a game they play very well.  Let's just say I'm imPRESSed with GRC BridgePress. Starting with good fruit from the renowned Seven Hills Vineyard (Walla Walla) is a well played hand. It was a pleasure to meet Melody.

2007 MERLOT (84% Merlot, 14% Cabernet Sauvignon, 2% Malbec) I was slightly starstruck when I tasted this marvelous Merlot. RICH, full-bodied with notes of coffee, chocolate and deep dark cherry. I stayed fairly composed about my discovery but knew right then and there that this was a wine I'd have a future with. It was LOVE at first sip.
You can try BridgePress at the Grand Rhone "Wine Cellar" located at the corner of 2nd & Lincoln in downtown Spokane.  BridgePress will participate under Grande Rhonde Cellars in the Spokane Winery Association's Holiday Wine Festival which takes place Novemeber 19-21 at area wineries.


Thank you for the delicious afternoon, SIP

the wine guy, Matt Dolan said…
Completely agree with you, SIP. Great wines made by truly amazing people. I tasted them all at Rocket Market that afternoon and all were excellent. The Bridgepress Merlot also surprised me and was my favorite.
November 28, 2010 at 12:08 AM