Drinking with the STARS! Celebs in the wine biz.

November 06, 2015
Celebrities are in drenched in WINE.
Introducing the drinking with the STARS cast list.

***"OLIVE me loves OLIVE you" Okay, so maybe that's not quite how it goes but one thing is for sure - Music superstar, John Legend has entered the wine biz. LVE: Legend Vineyard Exclusive has produced a Napa Cabernet Sauvignon and a Chardonnay with the help of Raymond Vineyards.

***GoGi is the passion project of actor Kurt Russell, who has quietly been making Pinot Noir in Santa Rita Hills since the 2008 vintage. With the help of Peter and Rebecca Work of Ampelos Cellars (as well as their son Don Schroeder, head winemaker at nearby Sea Smoke Cellars,) Kurt’s GoGi label has grown from a minuscule 25 case production in 2008 into a serious outfit that now produces truly exceptional boutique wines. The Chardonnay is appropriately called Goldie.

***Rumor has it Lady Gaga has been spotted roaming around Sonoma County looking for a vineyard to buy In Spring of 2012. The stilettos may have been a sure sign, she wasn't a local. The singer, who is currently worth over 90 million is apparently quite a fan of red wine and believes that grapes could be her next creative venture. Can't you just imagine the packaging? 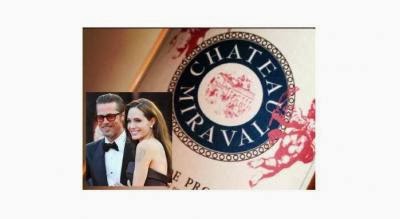 ***Brad Pitt & Angelina Jolie:
The celebrity power couple will launched their own rose wine March 2013. Rumor has it that the wine is charmingly good. The pair has teamed up with the French winemaking Perrin family to develop the Miraval Cotes de Provence label, named after their Chateau Miraval estate in the south of France, Marc Perrin said. The wine, produced from the couple's sprawling estate near the town of Brignoles, will be priced at around 15 euro ($19.40) a bottle. Jolie and Pitt acquired the 500 hectare estate in 2008 for around 40 million euros (approx $516 million) and have used it as a summer residence. The estate includes around 50 to 60 acres of vines.

The following is a list of celebrities already in the biz.

Bruce Cohn: B.R. Cohn Winery Sonoma County, California Cohn is the manager of The Doobie Brothers. Bruce gets props for almost being local as he and his wife spend significant time at their lake place in North Idaho.


***Train: It probably took years to get Train's "Drops Of Jupiter" out of your head (likely replaced by "Hey, Soul Sister") but it looks like you might be humming it again. Join Train's brand new Save Me San Francisco Wine Club (yes, really), and sample the "fruit-forward, instantly lovable red" 2009 Petite Syrah titled Drops of Jupiter.  The band recently announced a chocolate project with Ghirardelli.

***Drew Barrymore: Barrymore Wines. Her first offering is a Pinot Grigio from Italy was recently released.

**Robert M. Parker, Jr.:Beaux Freres Vineyards and; Winery Willamette Valley, Oregon Co-owns winery with brother in law. To avoid a conflict of interest with his wine rating publication The Wine Advocate, Parker delegates the task of rating Oregon wines to another associate.

Charles Woodson: TwentyFour Wines Napa Valley, California Under NFL regulations, Woodson is currently prohibited from endorsing his own wines publicly until he retires.

Günther Jauch: Weingut von Othegraven Mosel (wine region), Rhineland-Palatinate, Germany Prestigious vineyard from at least the 16th century, listed cultural heritage site, since 1805 owned by Jauch's ancestors. Jauch, one of the most popular Germans, is owner in the seventh generation.

Bode Miller: Thinks wine making is in his future. The larger-than-life American has no immediate thoughts of quitting top level alpine racing -- he is having too much fun -- but according to Reuters he planned a future as a professional wine-maker when he finally lays down his skis. Miller has purchased land near his home town of Franconia, New Hampshire, with this project in mind and is still conducting studies to find out what sort of wine the land can produce. Maybe there will be wine medals in his future.

Anonymous said…
Sometimes it makes me ill to see that all it takes to start a winery is money. And then many of these celebrity wines fly off the shelf irregardless of quality or character. Granted, some are very good wines, but some are not very good at all. It takes a lot more to be a good winemaker than money and a public face.

On a lighter note, you should google "merkin" from Maynard Keenan's vineyard.

Anonymous said…
you forgot " TRAIN" they are wine conoisseurs and also WINES to their credit..One is titled "Drops of Jupiter" No Kidding.
October 12, 2012 at 3:05 PM

Sip of Spokane said…
Good point. I'll update this post. I recently saw Train (love them) on the Today show and they talked about their wine venture.