Since 2001, more than 100,000 people have attended First Night Spokane, making it the biggest and best New Year's Celebration in the Inland Northwest. First Night features a combination of visual and performing arts and takes over downtown businesses, event centers and streets.
There's a party going on and the whole family is invited. So bundle up and join the fun.
If you've never been before, here's what to expect at the biggest New Year's Party ever:

*One of the best fireworks shows of the year in Riverfront Park.
*You can see chainsaw ice carving and then Irish dancing. You can listen to African drumming, rock and roll, the Spokane Symphony, and Big Band Swing all in one night.
*Take in the Children's parade, watch street performers and the popular snowboard rail jam in Riverfront Park. And there is much more!
Each adult will need a First Night button, which runs $12 when purchased in advance. Th 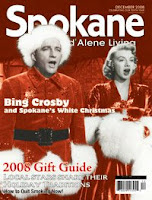 ere are a number of locations where you can get buttons in advance or they will have them for sale downtown New Year's Eve. Go to http://www.firstnightspokane.org/ for locations to purchase buttons and a detailed schedule to plan your night. Kids 10 and under accompanied by a button wearing adult are free.
On New Year's Eve, just dress warm, pin on your button, and come join the party. Several downtown hotels have First Night packages available, which includes passes and in some cases party hats.
Happy New Year!
(This article was published in the December 2008 issue of Spokane Coeur d'Alene Living Magazine, Buzz Section)
event published spokane

"Wine and cheese are ageless companions, like aspirin and aches, or June and moon or good people and noble ventures" M.F.K. Fisher, Vin et Formage. Washington State is not yet necessarily known for cheese. But the culinary landscape of Washington is dotted with well-known and well-anointed cheeses and cheese makers having Washingtonians take pride in their products. It seams only appropriate that the nation's second largest wine producing region, have a handle on cheese as well. Though there are other notable cheese makers in Washington State, a good EAST vs.WEST rivalry is represented by Cougar Gold and Beecher's. First a few basics about Wine and Cheese, that may just be the dynamic duo of the culinary world. The just go so well together and even though it really comes down to personal taste, certain guidelines have been proven favorable in pairing this iconic food couple. Here are some of those basic truths: • White wines match best with soft cheeses an
Read More...