Why we live here. Spokane, WA. 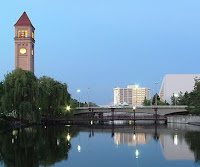 ﻿ Spokane is the second largest city in Washington State. (Psst over here, on the far east side of the State). Okay, let's be honest our vibrant city has often been overlooked, taking a back seat to the slightly hipper, and possibly cooler Seattle. But all that has been changing. Can't you feel it? Spokane is coming into it's own in a revenge-of-the-nerds type of way. We are actually becoming cool.

Spokane City is home to  205,000 residents, with 462,677 in the greater metropolitan area. Located 18 miles from the Idaho border (Cda), 280 miles east of Seattle and 110 miles south of Canada. This is truly a great place to be. You know what they say - location, location, location.

Whether you live in Eastern Washington or just visiting, 509 is more than just an area code. It's a way of life. If you are a transplant, you adjust quickly to the lack of traffic and instead make time to enjoy the great outdoors.  In the winter you go to the mountains and in the summer to the lake. Bike trails, hiking, camping, skiing and white water rafting await. So get out there already.

And then there's the wine. It's easy to become a Washington Wino. Eastern Washington is the second largest producer of wine in the country. From the Yakima Valley all the way to Spokane, grape vineyards cover the landscape where apple orchards used to thrive. From these vineyards that some of the finest wines in the world have emerged. Spokane is becoming a destination for wine. Go taste why. There are 17 area wineries and several other within in a close drive. Our wines are getting noticed, nationally and internationally; showing up on even the snobbiest wine lists. This year Wine Spectator named a Washington Wine (Columbia Crest) as the #1 wine in the world and 10% of the top 100 wines listed were from Washington State. There are over 650 wineries in Washington State and most of the grapes for those wineries are grown in the 509 area code surrounding Spokane.

Spokane is also a cultural center for the Inland Northwest, Spokane boasts more than 80 arts organizations, a professional symphony orchestra and one of the only big band jazz orchestra in the nation. Touring Broadway shows and major concert tours stop here regularly.

Spokane by the numbers:

4 The number of distinct seasons in Spokane
260 How many days of sunshine Spokane gets per year
76 The number of nearby lakes
35 How many golf courses surround the Spokane community.
17 Local wineries contributing to growing Washington State wine industry.
There are also 5 ski resorts, 5 major National Parks, the spectacular Columbia River Gorge, and Grand Coulee Dam all within an easy drive of the city.

Spokane welcomes visitors year-round, from the over 50,000 runners who annually take part in Bloomsday (the largest timed road race of its kind in the world) or the over 245,000 players in Hoopfest, the annual three-on-three basketball tournament (also the largest of its kind in the world) or the over 100,000 guests we hosted during the 2007 State Farm U.S. Figure Skating Championships. Ticket sales for the 2007 championships shattered records held by past host city, Los Angles. Then in an unprecedented repeat Spokane broke the record again hosting 2010 U.S. Figure Skating Championships. The nation is taking notice. Remember when nationally news would pronounce our city, Spo-Cane rather than Spo-Can. Some thanks go to the Zags for it finally being pronounced correctly.

In 2007 a total of 3,472,901 passengers came through the Spokane International Airport. Whether they lived here or were visiting, great things awaited them on their stay in Spokane.

See, we are pretty cool.