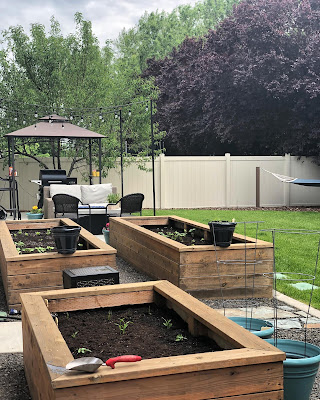 We planted a potager (pronounced: poe-tah-jay). It’s the French term for an ornamental vegetable or kitchen garden. A potager is meant to be useful and beautiful. I’m excited about growing fresh vegetables and snipping fresh herbs on demand. I’ve wanted to do this for so long. In the past, I’ve planted fresh kitchen herbs but that’s the extent of it.  All the guidance we’ve received has been greatly appreciated.

I began by taking the time researching and sketching out the plan for the raised garden beds.

The historical potager design is based on the Gardens of the French Renaissance and Baroque Garden à la française eras. Historically popular items were flowers (edible and non-edible) and herbs that are planted with the vegetables to enhance the garden's beauty.

With our lives being altered by Covid, we are now calling it our Victory Garden.
Victory Gardens, also called War Gardens were planted at private residences and public parks in the United States, United Kingdom, Canada, Australia and Germany during World War I and World War II.
In war times, governments encouraged people to plant victory gardens not only to supplement their rations but also to boost morale. 🌿

It’s no surprise that there’s a big surge in gardening right now and we decided we’re in. Our Victory Garden is sprouting! We already had lavender, strawberries, blueberries and rhubarb , as well as a peach 🍑 and a plum tree.

But now with the 3 raised beds and various containers we have a proper potager (aka French kitchen garden) with vegetables, herbs and flowers. 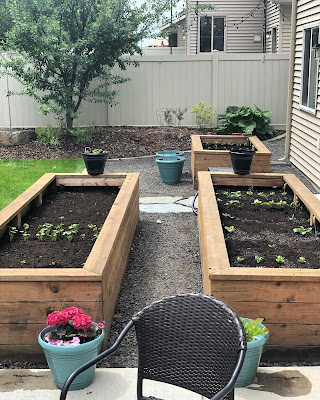