I don’t mind the rain 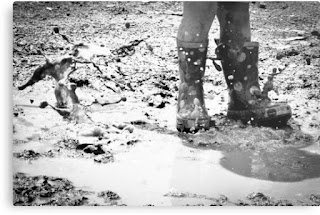 When I was a small child, we lived in Belgium for a season. Dad let my sister and I dance on our urban balcony in the rain. I remember the laughter, joy and freedom that washed over us. We were little and stark naked.

Although clothed, I used to take my boys puddle jumping in our neighborhood park that overlooked the ocean. While other parents held their children’s hands tightly, begging them to avoid the puddles, I was encouraging my boys to run through them and jump in them repeatedly. We lived in Seattle, so puddle jumping was a frequent activity. Although sometimes this was a spontaneous event, often we’d be prepared for our rain adventures. We’d have clean towels, a change of clothes and often a picnic waiting for us in our car.

So today it’s a rainy day and I’m more than fine with it. In fact I’m hoping the skies opened up and it really pours - Laurie Allen

"To them, time was like rain, glittering as it fell, changing the world, but something that could also be taken for granted." Cassandra Clare

"Wine and cheese are ageless companions, like aspirin and aches, or June and moon or good people and noble ventures" M.F.K. Fisher, Vin et Formage. Washington State is not yet necessarily known for cheese. But the culinary landscape of Washington is dotted with well-known and well-anointed cheeses and cheese makers having Washingtonians take pride in their products. It seams only appropriate that the nation's second largest wine producing region, have a handle on cheese as well. Though there are other notable cheese makers in Washington State, a good EAST vs.WEST rivalry is represented by Cougar Gold and Beecher's. First a few basics about Wine and Cheese, that may just be the dynamic duo of the culinary world. The just go so well together and even though it really comes down to personal taste, certain guidelines have been proven favorable in pairing this iconic food couple. Here are some of those basic truths: • White wines match best with soft cheeses an
Read More...