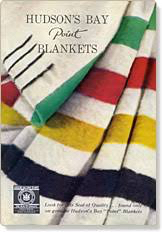 The Hudson’s Bay Company blanket is perhaps the most remarkable blanket in the world. The off-white wool patterned with iconic stripes of green, red, yellow, and indigo played a vital role in Canadian history and the iconic stripes are now considered a Canadian classic.

The Hudson’s Bay Company is a well-known retail group with claims of being the oldest company in North America. As far back as 1670, the company, then under royal charter from England, operated as a fur trading business, pioneering the exploration and settling of Canada.
According to the official company history, blankets had been taken to Hudson Bay as trade goods as far back as 1668. But it was in 1779 that the Company first commissioned the English textile mill of Thomas Empson in Oxfordshire.

The striped blanket proved highly popular with the native inhabitants of Canada. Easier to sew than bison and seal skins, and much quicker to dry, the blankets provided superb insulation during the harsh winter months. Often the blankets were converted into winter coats, known as "capotes."
As fur trade increased, it was the striped blanket can take credit for the early relationships between the company adventurers and the native tribes, and it was often traded for beaver pelts.
As well as the traditional stripes, the iconic blanket was also known for its "points": a series of thin black lines located just above the lower stripes. These "points" were not, as is sometimes commonly believed, an indicator of how many pelts the blanket was worth in trade, but an easy-to-read measurement of how large the blanket was. When folded, the lines, or "points" would be displayed, easily indicating the exact size of the blanket. The term stemmed from the French empointer (to make threaded stitches on the cloth).

As the lucrative fur trade expanded into Canada, demand was so great that production back in England was expanded to the A.W. Hainsworth Company in Yorkshire toward the end of the 18th century. Still made there today, Hainsworth is so prestigious, it was worn by both Prince William and Harry at the 2011 royal wedding.

By the 19th century, the Hudson’s Bay Company had evolved into a vast mercantile. Today the company is one of the oldest existing in the world, and still bears the distinctive colored stripes on some versions of its logo.

These days, the distinctive stripes can be found on everything from iPhone cases to golf balls to luggage. But the blanket itself is still for sale and in-demand. It looks much as it did when the original orders were placed in London over 230 years ago. 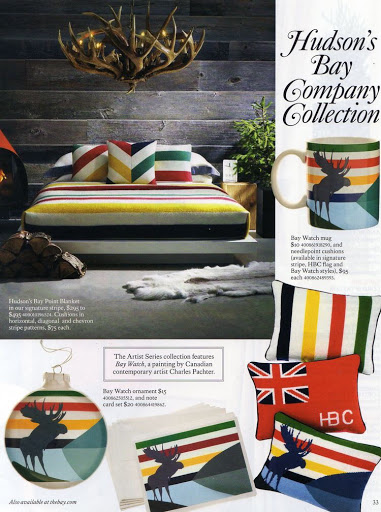