A Standing Ovation at the Bing 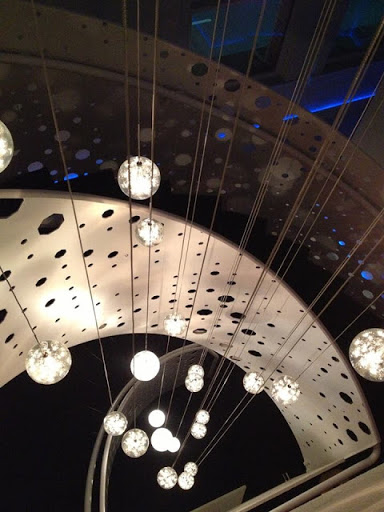 If you’ve attended a show at the Bing Crosby Theater in downtown Spokane, you may know that they serve alcohol. That’s right; beer and wine are available before, during and now after shows. Call it a concession stand for adults, but it’s a game changer for small cinemas. The transition occurred when Washington State liquor laws were loosened for theaters that met a certain criteria. The Bing met the small luxury theater criteria and started pouring at the lobby concession in spring of 2013. This change in law provides a unique draw for small, often independently owned theaters that compete with huge multiplex cinemas.

The drink option premiered in July of 2013 with Standing Ovations Theatre Club, a swanky lounge nestled on the second floor of the theater. The newly established gathering place boasts 100 feet of windows that span the length of the space and an impressive high atrium ceiling, which adds a distinct drama. Upon arrival to the theater, take the elegantly curved ribbon staircase up from the entrance lobby, and you will have arrived. Similar to the theater, Ovations is an intimate space with an exclusive capacity of just 50. Ovations offers cocktails, beer and wine, as well as non-alcoholic beverages. Choices such as, a seasonal fruit and cheese plate, hummus platter and a tasty avocado dip are some of the items available to accompany drinks. Keep in mind only beer and wine are permitted in theater seats. Ovations provides the ideal place to meet up before, during intermission or following a show. A live performance is always special but it makes going to a movie more of an event. Ovations could also be the finale to the evening, a place to recap the magic of a live performance with a nightcap.

The treasured theater has always been special. It was placed on the National Register of Historic Places listings in Spokane County, Washington in 1990 and the national register in 1998. The architecture is stunning and the setting is intimate. Careful consideration was put in when adding Ovations to the historic building. The Bing is a great way to experience the arts in an up close and personal way that no other area venue provides. It’s a place where there truly isn’t a bad seat in the house and with recent improvements the sound is even better than before. The draw of Ovations and the ability to partake in a celebratory drink simply add to the experience.

With this addition of libations, it inspires the idea of pairing drinks with shows. For instance, Blues and Brews - A smooth IPA sounds appropriate while listening to the cool blues of Jonny Lang, a stellar performer who played earlier this year. Or one may suggest a sexy South American wine such as a sultry Argentinean Malbec, which pairs perfectly with the Latin influenced music of Ottmar Liebert & Luna Negra . This act has been back several times by popular demand. The Bing has also earned a solid reputation for showing second-run movies such a Ghostbusters or The Thomas Crown Affair. Depending if it’s a John Hughes cult classic (beer) or original Bond movie (bubbly) you have now have options to enhance your experience by perfectly pairing drinks with shows. The show and libations combinations are endless.

The theater, which opened as the Clemmer in 1915, helped legendary singer Bing Crosby launch his career. The former Metropolitan Mortgage & Securities Co. bought the theater and renovated it for a reopening in 1988 as the Metropolitan Theater of Performing Arts, or The Met. Local Businessman Mitch Silver acquired the theater in 2004 and agreed with Bing Crosby fans to rename the theater the Bing in 2006 to commemorate Spokane’s beloved stage, screen and recording star. Current owner Jerry Dicker’s acquisition in early 2012 came through his GVD Commercial Properties Inc. The beloved theater has since then received some well-needed restoration and technical improvements. One thing consistent throughout ownership changes same since 1988 was Michael Smith, the now retired venue’s General Manager. Witnessing 30 years of shows first hand, Smith doubled as the theater historian. Mark Holman, a beloved former radio personality now holds this position. Adding liquor sales to the ticket allows for shows not to depend on breaking even based on the ticket price alone. This is exciting.Dicker has become an important developer in Spokane who is interested in revitalizing the downtown core. He came to Spokane in 2000 from California to be near his grandchildren. Since his arrival, he has collected a few properties in and around Spokane to add to his out of town repertoire. A block to the south at First Avenue and Lincoln Street is the artsy Hotel Ruby and Sapphire Lounge. It was formally a 1950 motor inn that was an eyesore in the stylish  Davenport district. This was Dicker’s debut project as he revamped it with a hip and modern facelift to the now trendy boutique hotel, complete with a cozy yet equally fashionable bar called the Sapphire Lounge. The well-attended lounge with experienced barkeepers and tasty light fare made adding Ovations to The Bing an almost natural endeavor. The property development team already knew how to do a classy cozy bar and all that was needed was to translate it into the historic theater. Dicker also repurposed the former Bergen’s Furniture building on North Division to the Ruby Suites, long term stay hotel rooms with Quoba and Caruso’s eateries on street level.

Bravo! We offer a standing ovation and always look forward to an encore performance of a drink and a show. Ovations is located in the Bing Crosby Theater, 901 W Sprague Ave., Spokane, WA 99201

Laurie Allen’s article was previously published in an issue of Spokane Coeur d'Alene Living magazine. The article has since been updated in 2018. Photo Credit: Courtesy of The Bing. #LifestyleRealEstateGroup #Spokane #509 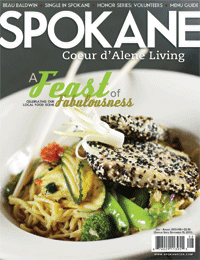