This title is problematic for online wine writers as there's not even a hint of romance about it. Although wine making is mostly a fairly unromantic process, wine bloggers tend to hone in the small bit that is. Regardless of my rant, this is our given name.

OH Canada! On the second week in June hundreds of us.... bloggers blogging blogs (mostly about wine) will converge on the city of Penticton.
Where?
Penticton.
It's  a city in the Okanagan Valley of the Southern Interior of British Columbia, Canada. It's population around 40,000 or so but its drenched in WINE.

If you haven't had the pleasure to make its acquaintance, you'll be impressed with Penticton, the Okanagan Valley wine growing region, and BC wines. Penticton is beautifully nestled between two lakes, with a backdrop of hills on all sides, and vineyards on the lake shore bluffs.  BC wines varietals range from Gewürztraminer and Pinto Gris to Cabernet Franc and some very hardy Bordeaux-style blends. They also have the Ice wine thing down.


Luckily for my travel companions, I speak and spell Canadian. Although I currently live in Eastern Washington (USA) and have for a decade or two, home for me is Canada. I grew up just across the boarder in a little coastal city called White Rock (British Columbia, CANADA). My folks (Canadian for parents) live up the hill from the beach and this will always be home for me.

So I'm thinking I can assist 'merican bloggers who are heading North for WBC13.

Here's a little hint when writing in Canada. If it doubt, adding a random "U" or "L" to words will help you look local. That and switching "er" to "re" such as, in theatre, litre and maneuvre.


"The colour of the grapes are marvellous. I can't wait to sip and savour the local flavour."  Get it?

Words like candour, behaviour, demeanour harbour, honour, humour, labour, neighbour, odour, parlour, rumour, tumour, valour, vigour and vapour are all are spelled correctly in Canada. Just by adding a "u". Our friendly neighbours to the North also like to add an extra "l" such as in marvellous, modell, jewellery and woollen. Yes, your spell check will have a heyday but you want to fit in, eh?

Now to Sound Canadian here's a few pointers that I embellished upon from Tour Canada.  You may not need this if there's speed tasting or if you attend the after-parties during WBC. An American talking tipsy may sound Canadian. 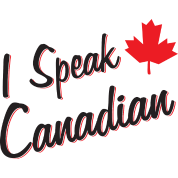 Diphthongs
Changing vowel location or talking tipsy.
Silent vowels
Replacing Y with two E's
An inconstant consonant
Verb Tenses
Present Tense
Joining prepositions with words EH? (They know when you are just throwing it out there)
Whatever
Now what you really need to know is about bringing home some of the liquid treasure you'll discover at WBC13
How much can you bring back? Well, the duty-free allowance (following trips of 48 hours or more) for bringing wine back to Canada is only 1.5 litres per person which is a rather miserly 2 bottles. You are allowed to bring back 8.5 litres of beer but only 2 bottles of wine. See CBSA site for the limits. If you are within the duty-free allowance, you won't have to pay anything extra. If you are lucky and have a nice customs person (of which there are quite a few), you might be allowed to bring back a bit more. There is zero duty-free allowance for alcohol for trips of less than 48 hours.

Hope this helps.
Canada is beautiful and I'm confident they will be marvellous hosts. We're in for a treat, eh?

Cheers!
I look forward to seeing you in C-eh?-N-eh?-D-eh?

Next post: The color of money. Really, its genius. Color coded money like Monopoly. Smallest bill is a $5 as coins rather than bills are used for $1 and $2 amounts.
Loonies & Toonies! God, I love this country.