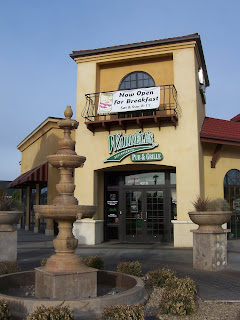 Reminiscent of an Irish Pub with warm wood paneling and hunter green booths, Waddell's Neighborhood Pub & Grille feels like a well-established watering hole, despite being less than two years old.

The Sunday Ticket and DirecTV Sports Package ensures your game will be shown on one of the seven conveniently scattered TVs. There are two more in the restrooms so you won't miss a play.

There are 20 draft beers on tap, over 50 chilled bottled beers and grab your passport because Waddell's can take you around the world with the Beer Sampler: for $20 you get 20 taster-size International selections.

Gameday specials include $8.50 Hefeweizen pitchers and $6 Coors Light pitchers during all NFL games.

As the weather turns colder, the Guinness Stew orders pick up. This stout chunky beef stew slow cooked with carrots, potatoes, onions, and celery can be ordered with mashed potatoes to make it into shepherd's pie. Waddell's is also known for their certified angus burgers with endless seasoned fries, baby back ribs and traditional fish 'n' chips. Breakfast is offered on weekends and there's a kids menu for the littlest sports fans.

As for the pub's namesake; an alligator-wrestling, bartending American League pitcher named "Rube" Waddell, who was a distant cousin to co-owner Josh Unser.

He was born on Friday the 13th. Waddell was known for coming to games late and changing on-field (without underwear), traveled with a circus in the offseason and still holds the American League single-season strikeout record by a left-handed pitcher.

Waddell's Neighborhood Pub & Grille proves a place doesn't have to be old to be a classic.

Anonymous said…
Wow! I have never been to Waddell’s, but feel I have a visual after reading this article. Thanks for adding to my list another establishment I wish to grace in the near future!
November 11, 2008 at 10:51 AM