While visiting wineries in Central Washington, every time we asked anybody where we should eat, we were sent to Gasperetti's with a plug for the onion rings. When on unfamiliar soil, a recommendation for dinner is almost required, so a meal isn't wasted on a 2 star establishment. So we were definitely going to the place everyone raved about - Gasperetti's. But we weren't completely sold on ordering the onion rings, we were told we absolutely had to have. 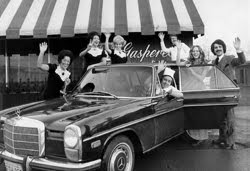 Gasperetti's has been a family tradition for 150 years and history never tasted so good. The restaurant claims in the year 1800 or thereabouts, it was a Gasperetti who delighted the palate of His Holiness, Pope Pius VII, with a delicacy especially prepared for him; Chicken Cacciatora, which can be found on the menu.
From this distinguished beginning, Angelo Gasperetti carried the tradition across the sea to America at the turn of the century. In 1921, his 19 year old son Mario arrived at Ellis Island and eventually settled in Union Gap, Washington. With an expert knowledge of Italian cuisine taught to him by his mother who ran a restaurant near Florence, Italy, Mario and his wife Minnie, started Gasperetti's Restaurant in Union Gap, Washington in the summer of 1943. For twenty-seven years served delicious Italian food until their retirement in 1960. In keeping with his Italian heritage, John Gasperetti, Minnie and Mario's son, opened Gasperetti's Gourmet Restaurant in its present location at 1013 North First Street. With Mario in the Kitchen and his mother Minnie and sister Jean helping him host, Gasperetti's earned a reputation as one of the finest restaurants not only in Yakima but anywhere.
The story continues in 1967, when the Chef, Brad Patterson joined the family. Patterson worked closely with John's father, Mario, to learn all the family's "secret" Italian recipes. Patterson attended Le Cordon Bleu, Paris, however, his menus reflect the bounty of fresh fruit and vegetables of the Yakima Valley. 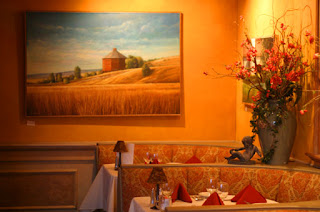 This farm-to-table approach makes a fresh choice you can taste. As you may suspect, being located in the heart of Washington wine country the wine list is exquisite offering the perfect accompaniment to your meal. Gasperetti's offers an award winning wine list that features many of the Yakima Valley's best vintages, as well as wines from California and Italy. Throughout the year Gasperetti's holds special wine dinners that spotlight local and regional vintners with seasonal cuisine.
So, were simply passing on the rave review and recommendation - that when in Yakima, don't miss the dining experience at Gasperettis. You know a restaurant is good when before you depart, you're trying to figure out when you can get back. If you are still wondering what all the fuss is about and feel the pressure to try a tower of the onion rings made exclusively with Walla Walla Sweets and ordered as pre-dinner appetizer. Well, do order the onion rings. After we succumbed, we found the mouth -watering onion rings were out-of-this-world delicious.
If you going this Summer, The patio is now open! Stop by for lunch Monday-Friday starting at 11:00a.m.
(Photo Credits and Restaurant History: Gasperetti's)